Manchester United are in the hunt for a world-class center forward, according to the report.

According to Sport (press image provided below), the Red Devils will enter the summer transfer market to sign a proven quality striker and top names have been linked with them.

The famous Spanish news outlet have mentioned that the Old Trafford outfit entered the bidding for Erling Haaland but then withdrew because the Dortmund star does not want to go to a struggling club.

They have also tried to lure Harry Kane but it is stated that the Three Lions captain is set to stay with Tottenham Hotspur for another year.

In such a scenario, the Catalan outlet report that Man Utd have stealthily moved to hire the services of Robert Lewandowski, whose current contract with Bayern will expire in 16 months. The Premier League side have contacted the representatives of the player in order to stay up to date with his situation at the Allianz.

The 33-year-old center forward, who earns around £398,000 a week (Sky Germany), has won every major prize with Bayern Munich. He was named the UEFA Player of the Year in 2020 and FIFA’s Best Player in the last two years.

As far as this season is concerned, so far, the Polish superstar has netted 47 goals in 42 appearances (all competitions) for the Bavarians. For now, he is the leading goalscorer in the Champions League with 13 goals but will not be able to add to that tally as Bayern were eliminated in the quarter-finals by Villarreal.

The 129-capped international will turn 34 in four months. In your view, should Man Utd move in with an offer to sign him this summer? 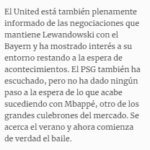