It’s reported that Chelsea are pressing hard to beat Manchester United for the signing of Frenkie de Jong, but the Barcelona star prefers joining the Red devils.

As per today’s version of Sport, Blues’ new owner, Todd Boehly is in Barcelona to negotiate with the Catalan club. 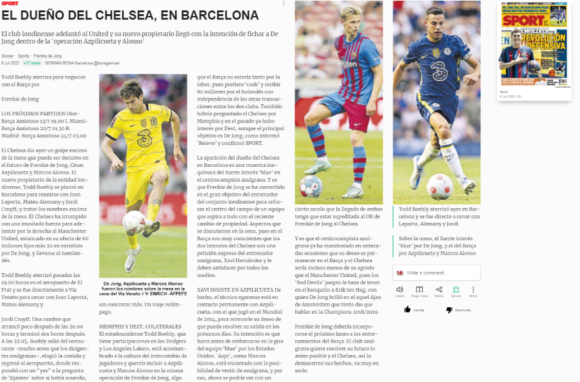 The famous Spanish media outlet claim that the blues are ready to overtake the Red Devils to sign the 25-year-old midfielder.

It is stated that Tuchel’s team are ready to offer cash plus Alonso and Azpilicueta to hire the services of the former Ajax man. On the other hand, Man Utd are stuck after offering €60m fixed and €20m in variables.

Barcelona have made it clear that they want a fixed payment of €80m (£67.5million) to sell the player, who wishes to stay at the Nou Camp.

Sport claim that in case of departure, De Jong will snub Chelsea and prefers a move to Man United to work under the management of Erik ten Hag.

Since Manchester United will compete in the Europa League the next season and Chelsea can offer Champions League football, this would be an unexpected choice.

The Blues are still extremely serious, and Boehly had supper with Mateu Alemany, the sporting director of Barcelona, and president Joan Laporta. The Blaugrana’s head coach, Xavi Hernandez, has specifically asked them to sign both Chelsea fullbacks.

De Jong has been United’s top target this summer, and if they want to sign him, they’ll need to move quickly and pay the £67.5 million (fixed) asking price.