According to Fabrizio Romano who claims exclusively that a meeting will take place in Amsterdam today between Manchester United and Ajax officials to discuss the transfer of Lisandro Martinez.

The centre back has made no secret of his ambition to play in the Premier League this summer, with Manchester United and Arsenal his main suitors.

Arsenal was the first to make a bid for the player, but it was refused, and United began to get the upper hand. Their second approach, apparently at €45 million plus bonuses, was also rejected, but the player has pleaded with the club to come to the table.

This seems to have resulted in the scheduling of today’s meeting. “Excl: Manchester United will meet with Ajax on Wednesday to discuss Lisandro Martínez deal,” Romano tweeted late last night. “Negotiations now entering into key stages.

“Last proposal was turned down but Ajax are finally open to sell Lisandro at their conditions. “Player pushing as he wants PL move soon.” 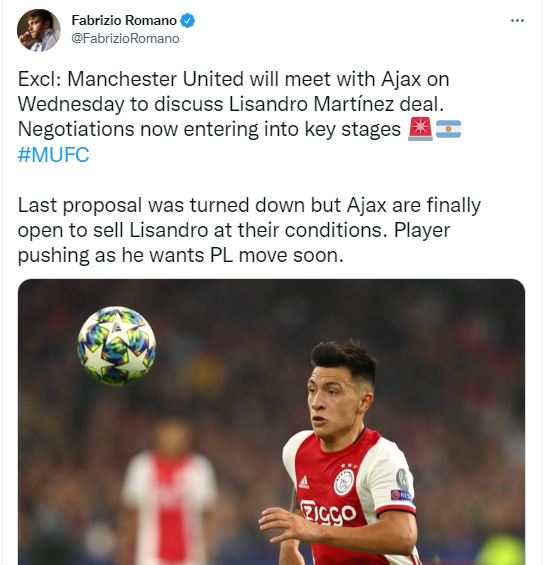