Manchester United have apparently struck a full agreement with Barcelona over the probable transfer of midfielder Frenkie de Jong, and fans will be hoping that this saga is finally coming to an end.

According to Fabrizio Romano, the Netherlands international has yet to agree on personal terms because his objective is to stay at the Nou Camp.

See the tweet below for an update on the issue, with Manchester United finally reaching a full deal with Barcelona for De Jong, with the former Ajax man likely to cost €75 million plus add-ons if he changes his mind and accepts the move to Old Trafford. 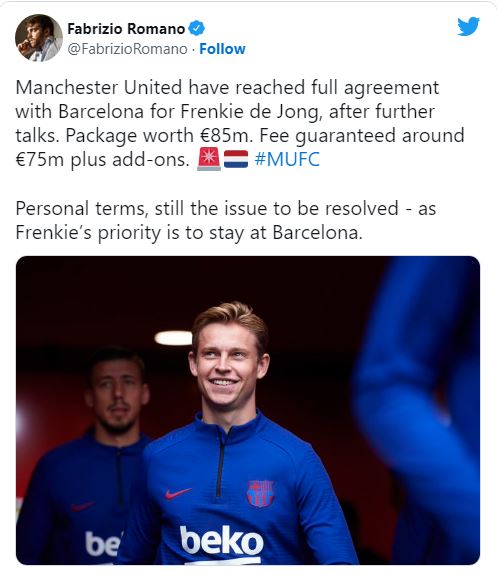 De Jong appears to be a perfect fit for Erik ten Hag’s style of play, and he’d also significantly strengthen United’s midfield, which is looking like a weakness after the departures of both Paul Pogba and Nemanja Matic, while there are still doubts about the likes of Fred and Scott McTominay, and Donny van de Beek has just returned from an underwhelming loan at Everton.