FC Barcelona and Bayern Munich have reached an agreement for the transfer of Robert Lewandowski.

This has been claimed by Tomasz Wlodarczyk who said that the deal is now just a “matter of formalities” when writing for Polish website Meczyki.

Wlodarczyk believes that the transfer process has “substantially accelerated” since Thursday evening, with Barcelona and Bayern reaching an “unofficial” agreement in principle that will be finalized in the coming days.

On Friday afternoon, German media reported that Barcelona would make a fourth bid for the 33-year-old. Meczyki said it will be accepted before the Bavarians meet with the Catalans to iron out the details and put pen to paper.

Lewandowski is poised to sign a three-year contract with Camp Nou, bringing him up to his 37th birthday. If a contract can be reached by the end of the weekend, the Poland captain is anticipated to join the Blaugrana on their pre-season tour of the United States in readiness to play his first Clasico against Real Madrid on July 24 in Las Vegas. 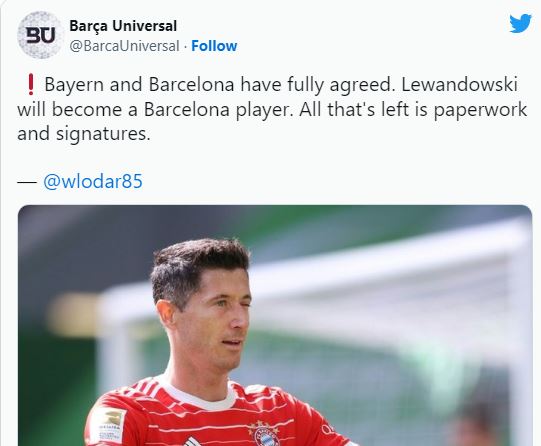 The Polish report does not specify how much Barcelona will pay for Lewandowski, but it is believed that the La Liga giants, who are currently mired in $1.5 billion in debt, were willing to pay up to €50 million ($50.4 million) for the man who has averaged 50 goals in his last three seasons for Bayern.

Receiving such an amount signifies pure profit for the Germans, who paid nothing to sign him as a free agent from domestic rivals Borussia Dortmund in 2013.

Landing Lewandowski concludes one of the summer’s major transfer sagas for Barcelona, as he has been their top goal since the end of a trophyless season for Xavi Hernandez’s side last season.