The Mirror reported two days ago that the £320,000-a-week star is at odds with the Blaugrana over £17 million in unpaid wages. Ten Hag, on the other hand, is willing to wait until the final day of the transfer window to sign his top priority.

According to Sport (news image provided below), the Dutch coach is in frequent communication with his compatriot as he attempts to complete the signing.

According to the Spanish news outlet, following the deferral of De Jong’s income due to covid, the midfielder will earn a full salary in the coming season.

Barca cannot afford to pay the wages. Therefore, the La Liga giants need him to leave the Nou Camp so that they can meet the allowed salary limit. Man Utd see the 25-year-old’s deferred salary as excessive but Sport claim that they are willing to agree on a five-year deal in which he would recover all the money to be received.

For the time being, De Jong is with Xavi’s squad in the United States, and it will be interesting to see if the Spanish manager will use the Dutch midfielder when Barcelona faces Inter Miami tomorrow. 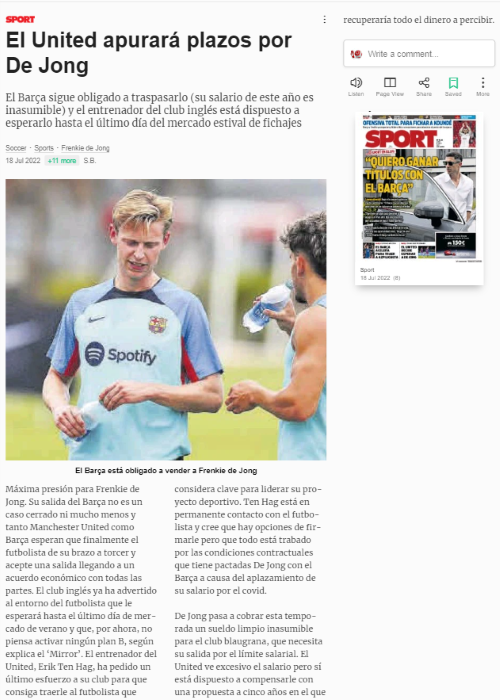