As the two clubs continue to negotiate the planned move, Fabrizio Romano reports that Manchester United and Frenkie De Jong have reached an agreement that the final sum will be €85 million.

The Italian journalist updated his fans on social media regarding the rumors that De Jong could be moving to Old Trafford.

Since Erik ten Hag was named the team’s new manager, the 25-year-old midfielder has emerged as one of Manchester United‘s top targets for the summer transfer window. De Jong has been frequently linked with a move to Old Trafford.

However, according to Romano, negotiations between the two clubs are going well, and FC Barcelona and Manchester United have already agreed that the total price for the Netherlands international will be €85 million. The discussions are now reportedly centered on the specifics of the deal’s structure.

According to the Italian reporter, €65 million of the cost will be “guaranteed,” with the other €20 million planned to be added on under a framework that has not yet been determined. After a fee has been agreed upon, personal terms with the player will be discussed, Romano added.

Posting on his personal Twitter account, Romano said: “Manchester United and Barcelona have both clear that the final value of Frenkie de Jong deal will be €85m package. Discussions are ongoing on the €20m add-ons structure, so it takes time – the guaranteed fee is €65m.

“Personal terms to be discussed with Frenkie right after.” 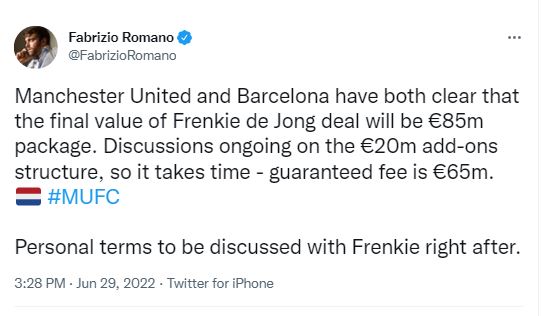